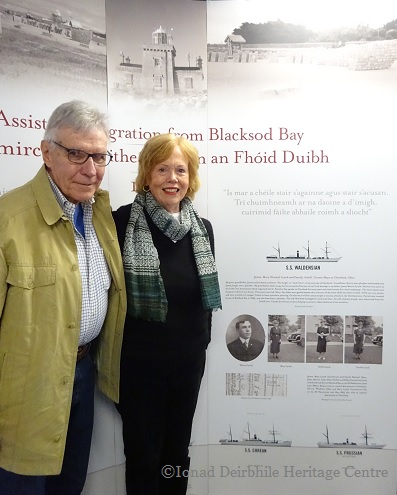 The small townland of Leam situated close to Elly Bay on the Mullet Peninsula, was home to Pat and Cath (Dixon) Monaghan with their seven sons, Michael 13, Anthony 11, John 9, Patrick 7, William 5, Peter 3 and Thomas 1.

For the Monaghan family the distance to board the Allan Line Steamer in the bay, was little more than a ‘stone throw’ away. A familiar path travelled many times, as often they must have made their way down to the shore. The masts of the SS Waldensian would have been visible in the distance from Leam and surrounding townlands. Soon they would be aboard the ship on their way to Warren Rhode Island, U.S.A. The 22nd June was to be the last Tuke sailing of 1883. On arrival at Boston on the 4th July, the family continued onwards to Warren, Rhode Island, to work secured at the Warren Textile Mills.

Maggie Mulligan O’Brien and John travelled from Boston, Massachusetts back to Leam, Ionad Deirbhile Heritage Centre and Blacksod Bay. Maggie is the granddaughter of Thomas age 1, the youngest of the seven Monaghan brothers.  Maggie and John met with local Monaghan families, who helped piece together the family history. It’s not always possible to connect descendants with present day relatives, but when it happens it’s really special!