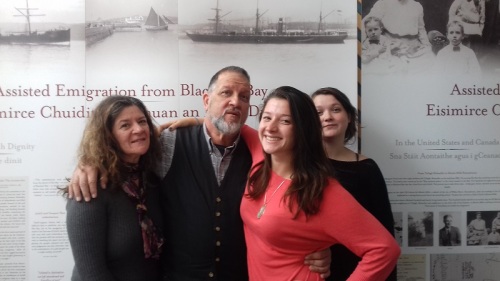 On the 22nd of June 1883 Pat and Cath (Dixon) Monaghan, with their seven sons, Michael, Anthony, John, Patrick, William, Peter and Thomas, boarded SS Waldensian. A life changing journey lay ahead of them. The Monaghan family were travelling from their small village of Leam, situated on the Mullet Peninsula to Warren, Rhode Island U.S.A. When the Waldensian arrived at Boston on the 4th of July, the Monaghan family continued their journey onwards, to Warren, for work at the Textile Mills.

One of the seven Monaghan brothers, was William age five, on leaving his village. Many years later another William Monaghan stood in the village of Leam………also Maryagnes in their Grandfather’s footsteps. William H. Monahan (3rd) grandson of William, travelled from Vermont, U.S.A. with his daughters and sister Maryagnes, Granddaughter of William. Maryagnes made the journey from New Hampshire, U.S.A.

The name Monaghan became Monahan in the United States. Other families leaving from Blacksod, on the same sailing were also travelling to Rhode Island. A Michael and Anna (Dixon) Barrett Family, also left from the same village, onboard SS Austrian for Minneapolis, Minnesota.