Frank and Sarah with their family Anthony, Bridget, Francis, James, Michael and Ellen left Blacksod Bay  onboard SS Scandinavian 22nd April 1883 for the port of Quebec.  Other families of Erris, Achill and also the same townland of Tipp, made the voyage together. The manifest stated “No destinations given, all Tuke’s passengers”. On the 1891 Census of Canada, the Tougher family are living at Muskoka and Parry Sound, Ontario. As with many Toughers arriving in the United States, the name Tougher in Canada,  became Tucker.

Bridget Tougher  was age fourteen when she travelled from Tipp to Canada with her parents and siblings.  Max Leighton, a great, great grandson of Bridget, made the journey back to Tipp from Toronto. Thank you to Phil McIntyre, for kindly guiding everyone around the townland of Tipp.

Richard Rook, a descendant of John and Cath (Murray) Tougher of Tipp, was also visiting the Centre from Massachusetts, with his wife Dyan.  John, Cath and   family, emigrated a week after Frank and Sarah, onboard SS Phoenician from Blacksod Bay. Max, Richard and Dyan also attended a Tougher Family Re-union, organized by Anna Lynskey  and held in Cartron, at Turas Siar Irish Language, Culture Research and Genealogy Centre ran by Pap and Catherine Murphy.

In April 1883 two families left from the same townland on different ships, one to the United States and the other to Canada. On a weekend in October 2016 a descendant of each of those families met up on the Mullet Peninsula, where it all began.

On Friday 27th April 1883 John and Cath (Murray) Tougher with their family, left Tipp, Aughalasheen, Belmullet, to set out on a life changing journey. The Tougher family boarded the SS Phoenician at Blacksod Bay for Boston. On arrival,  John, Cath and children journeyed onwards, to Grosvenordale Textile Mills in Connecticut. The Tougher family, were especially mentioned in the Tuke Report, referring to the arrival of the Phoenician, featured in the Boston Daily Advertiser. By 1900 the Toughers were in Cumberland Town, Rhode Island working in the Textile Mills, with younger children being educated at school. The name Tougher also became known as Tucker in the United States. 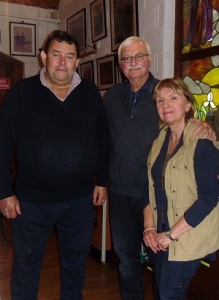 Max Leighton a descendant of  another Tipp family, Frank and Sarah Tougher,  who emigrated onboard the SS Scandinavian, was also visiting the Centre.

In April 1883 two families left from the same townland, on different ships, one to the United States and another to Canada. On a weekend in October 2016 a descendant of each of those families met up on the Mullet Peninsula, where it all began.

“Thank you to descendants of other families, also on this sailing of SS Phoenician who have connected with Blacksod Bay Emigration”.